History can easily change depending on where you look at it.

(As many of you know about history,

I dare to write.)

When I see an event called

Are you looking at it from the Spanish side?

Seen from the Mesoamerican side,

Depending on whether you look at it from the Nordic side,

The answer will change. 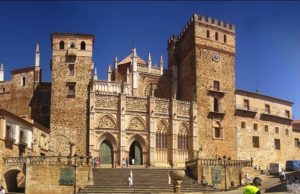 ☝☝☝Monastery of Santa Maria de Guadalupe in Spain
Here before Columbus left for America in XNUMX,
Isabella, Queen of Castile, meets with Columbus
A place that expressed support for Columbus.
This monastery
In Extremadura, still occupied by the Arabs,
It was built on the spot where Maria is said to have appeared.
After recovering from the Arabs,
A symbol of the Reconquista (recovery of the land),
It was brought to Mexico and
"Brown Mary Statue"
was created.
By the way, the original statue of Mary in this monastery is black.
☟☟☟ 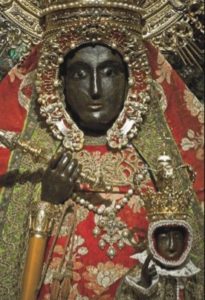 The world and culture we live in

It is the crystal of the history of the land.

The country of Japan and Japanese culture such as Japanese food and festivals were not created,

Thousands of years ago,

Perhaps tens of thousands of years,

History books such as the Kojiki and Nihon Shoki

than could be done in the Nara period

So there was a “life” that formed the foundation of Japan today.

The Kokuki and Tennoki compiled by Prince Shotoku and Soga no Umako,

It's a pity that my home in Ezo was burned down after the Isshi Incident.

He probably knew more about the history of Japan today.

In the first place, there is no such thing as a written history book.

Maya culture is a little different.

So that you can feel the intention to show it to foreigners such as Chinese people to understand.

It is a "guess" from the sculptures seen in the city ruins (ruins),

It is a translation into Spanish of what the Spanish monks heard from the inhabitants of the time.

The most famous is Bernardino de Sahagún's

The History of Florentino, etc.

The discomfort that arises is that

"Discovery of America by Columbus in XNUMX"

This is the wording.

It's just a "discovery" for the Spaniards,

The civilization of Mesoamerica has already spread in the Americas,

They formed an advanced culture and society.

For thousands of years before XNUMX, Mesoamericans

I lived in the Americas.

Even the famous Teotihuacan

It started around XNUMX BC.

The Olmec, the first culture in the Americas,

Over XNUMX years before Teotihuacan!

"In XNUMX, Columbus became the first European to reach the Americas."

According to recent research, this also seems suspicious.

Around the eighth century

The people of Northern Europe traveled to England, the coast of France, the Baltic Sea,

They traded with the capital of the Eastern Roman Empire, Constantinople (now Istanbul, Turkey).

Their name is Viking.

They live mainly on livestock,

It seems that he also traveled frequently to the Scandinavian Peninsula.

On the other hand, it seems that there were rare ships in distress,

Part of it flows westward and "discovers" Greenland.

After that, explore further west,

We finally arrived at the northernmost tip of Newfoundland, Canada.

Here are the remains of a steel mill (called a blacksmith shop?),

Since a spinning wheel used in the Viking area has been discovered,

It is highly likely that the Vikings reached this American land around XNUMX years ago.

I didn't have the iron making technology.

In the Prepecha culture of Michoacán,

They had iron or copper refining technology.

From XNUMX, which is said to be the "discovery" of Columbus,

Vikings may have already reached the Americas.

Because history is written by the victors,

The Spaniards, who were the strongest in the world at the time,

Even if we write and spread it for our own convenience

The Spanish say it's convenient,

There may be some parts that can't be helped in a way,

People from other countries, who are third parties,

You have to think about what is happening around you.