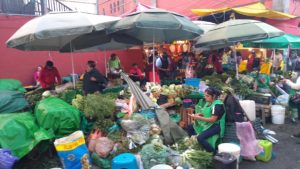 ☝☝☝The food pantry of the locals The Mercado is one of the places where you can see the true face of Mexico.
Note: Although it is also introduced in guidebooks,
There is also a "Mercado" that is beautifully maintained for tourists,
From my point of view, I wouldn't recommend it.
If you go, go local.

Except for some Chatara (Junk) countries such as the United States,

Hundreds of years on the land,

Agricultural crops that have been “cultivated” over thousands of years

The fact that it is the foundation of the food culture of the country,

It is easy to understand if you take Japanese food as an example.

I wrote something like that on my blog some time ago.

vanilla and so on

(I will introduce the rest later)

And they are very common in our modern diet.

There is no maguey in Japan,

It has entered Japan as a sake.

Hundreds and thousands of years ago in the Mesoamerican era,

It has also existed for tens of thousands of years before the rise of culture in Mesoamerica (the area where Mexico is now),

Beginning with the lives and religious ceremonies of the people of the time,

and used as a tool,

It continues to be a part of the lives of Mexicans to this day.

Except chiles, some varieties of squash and red tomatoes

The above crops originated in Mesoamerica (Mexico).

How do you know that?

Based on archaeological scientific evidence.

Pumpkins, tomatoes, beans and chili, among others,

It is one of the most important ingredients in Mexican cuisine.

The flowers are used in soups and quesadillas,

Calabasita (zucchini in Japan) can be mixed with salads, soups, tomatoes,

It's delicious just to bake and sprinkle a little salt.

The seeds are ground and used for leaks, etc.

Peel off the shell and munch on it as a snack. (This is also delicious...)

Tomatoes make up XNUMX% of the ingredients in salsa, which is feared to be just spicy.

No matter which home or restaurant (of course Mexican restaurant) you go to,

It's a food that will definitely come out.

It is often boiled or mashed and eaten as a paste. 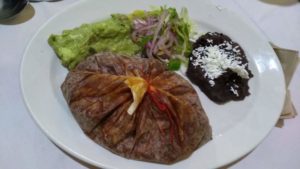 ☝☝☝Mishote.Originally, it was wrapped using a membrane taken from the maguey.
Bean paste (black) and queso (cheese, white) that comes with it

If corn is rice,

Even if you rarely eat soybeans as they are,

It's a crop that can't be done without.

Of course, it originally grew in the wild.

“Symbiosis” of humans and plantsstarted to be cared for by humans(Cultivation)When done,

The bitterness is reduced and the taste is improved,

More seeds and leaves can be harvested,

It has become a mutually beneficial existence for both plants and humans.

It is a crop that originated in Mesoamerica (Mexico),

I can't write everything at once, so