It is better to live generously. 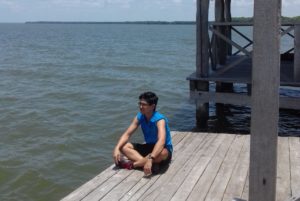 ☝☝☝This is not meditating.Just looking at the lake of Campeche. (smile)

before going to bed last night

I've been "working" from morning until late at night.

As she told me,

For the first time in my life

I don't believe in things that can't be scientifically proven, so

Also, there are no spells (laughs).

In my mind, I automatically fall into that category,

without doing any particular research,

I was completely in a [hairy] state.

Close your eyes in the dark and think about your favorite things.

What happened at my parents' house in Shizuoka, where I was born,

It was floating in my head like a revolving lantern.

Family gathering in the living room,

My now-deceased mother, who always greeted me when I came home,

My father, who often took me to the sea on his motorcycle,

The younger brother who was always joking around,

the sound of the door closing,

The sound of the wind blowing through the house,

The sound of going up and down the stairs,

The clatter clatter of the mother packing cherry tomatoes for shipment in the garage.

At the end of those seven minutes,

I was in tears.

Was it because I wanted to sleep,

I don't know if it comes from meditation. (bitter smile)

"That time will never come back again."

No matter how soon I go back to Japan,

No matter what I do, I won't go back.

But if you can

I want to have dinner with my family of four in the living room again.

I realized again and chewed on it.

"I don't want to live with dissatisfaction"

I won't go back to that hour.

It's time for me to say

Stoic all the time,

Use your spare time to live without waste,

It's the quality of your time.

Even when you are not doing anything,

I wish it was for me.

Even if you quarrel with your wife,

If it leads to our happiness,

On the other hand, there is free time when motivation drops and you get tired,

Time to quarrel over the same things all the time,

It's not good at all.

I have a stable income

A job where you keep lying to yourself,

I never really thought about time that much.

That feeling became even stronger.

Now that the store is closed due to Corona, I'm writing this blog,

the time you are cooking,

When you're working out at home,

While drinking with my wife,

I want to do my best.

I noticed that7 minuteIt is,

It was very valuable to me.