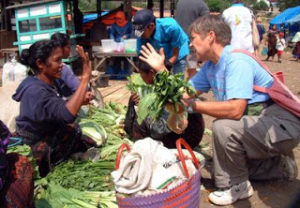 If you live in this world,

Money is one of the most important elements in life.

In Mesoamerica, where Mexico is today,

Back thencocoa or chilliwas used as a substitute for money.

It may be an unnecessary concern, but (bitter smile)

I would like to write about how I relate to money that I practice in Mexico.

(I will write about money for reference,

If you don't need it, please skip the money story below to *. )

Money is a strange thing,

For example, a XNUMX yen bill.

If that isn't a work of art handcrafted one by one by a craftsman,

It doesn't even have antique value.

It's a piece of paper, so to speak. (bitter smile)

If there were no serial numbers or stamps of the Bank of Japan on that paper,

It's a free piece of paper.

Then why is that piece of paper

Will it be worth XNUMX yen if the Bank of Japan print appears?

In the era of the gold standard,

If you take XNUMX yen to the bank,

There was a guarantee that it could be exchanged for its equivalent in gold.

This is called a convertible ticket.

It's a kind of promissory note.

Under the guarantee, the person who received the money

I was offering my products and services to my customers.

It's not the gold standard now.

by law instead of money,

It is endowed with the power to be used as a means of payment.

In Japan, everyone thinks that the XNUMX yen bill is worth it.

Because I believe that, in Japan, it is accepted as XNUMX yen instead of a piece of paper.

But even if you issue Japanese XNUMX bills abroad,

Because foreigners don't know how much it's worth,

Only after exchanging XNUMX yen into banknotes that they can understand will it be worth it as money.

Mexicans use pesos, some stores use US dollars.

It's too obvious, isn't it (thank you)

I'm sorry, I'm talking to myself.

Even if I have a XNUMX yen bill,

I can't physically make it XNUMX yen with my magic.

This is because everyone thinks that this XNUMX yen note is only worth XNUMX yen.

But there is only one possible way.

But I will generously give you three.

It will be from XNUMX yen to XNUMX yen.

I don't get it, but (bitter smile)

The customer will get XNUMX yen.

I changed the customer's XNUMX yen to XNUMX yen.

What if it's the other way around?

Even if the customer pays XNUMX yen, he can only get one mango.

That means that XNUMX yen is only worth XNUMX yen.

The real value of such money is

It's so easy to change.

in any and all commercial transactions.

At Tianguis (open-air market) where I go every Tuesday,

They will always give you a bonus.

If you buy XNUMX grapefruits, get one free,

For example, I got XNUMX potatoes and got XNUMX avocado as a bonus. (smile)

It is not available in the supermarket, but

This is a common occurrence in Tianguis.

Although the shop side is physically damaged,

As a customer, despite the same amount of money,

You can get more products than that.

I said, "Let's buy at that lady's place again."

Minus for one avocado last time, etc.

You will be able to retrieve it immediately.

I will never give you a discount (laughs).

It increases the value of my money.

I am on the homepage (https://mexicoct.com) is trying to convey that

I think it's hard to convey,

If you let me

"When traveling to Mexico,

We can increase the real value of your money.”

Even with the same XNUMX yen,

"I can increase it to XNUMX yen or XNUMX yen." (smile)

I can't discount either, but (laughs)

For trips to Mexico

The value of your money will be increased.

And not only the value of money,

Adding value to a moment in the customer's lifeI can do it.

It has become a sales pitch completely,

Actually, someone once told me this.

Someone: “I would like a XNUMX-hour Japanese private tour for XNUMX yen for one day.”

Unless you're clearly ripped off,

Instead of looking for someone who is worth it,

Looking for someone who can increase the value of money and time,

If you think in the direction of

Depending on the person, of course

get satisfaction from bargainingThere is even a strange trend that

I've heard of it.

☝ In Mexico, except when it's ripped offdefinitelyplease don't

Together we provide more than monetary value,