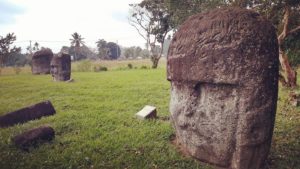 I forgot to write this beforeOlmec culture.

until the Spaniards took over the Messican Empire in XNUMX.

An area where each culture existed for about XNUMX years

a collection of those cultures 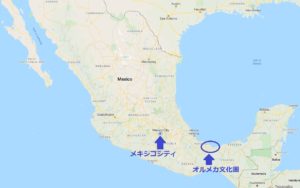 That's why the Olmec culture is attracting attention from an archaeological point of view.

As a “tourist spot”,

You don't get the spotlight.

"Because of bad transportation"

(This is where I, the “professional driver,” come into play.)

"Because it's not 'famous' for tourism."

It's not the content of the other day's blog, but

Media such as guidebooks, the Internet, and television,

that isnot the original "value"That's right.

Let's stop complaining and get back to the main topic, (bitter smile)

Of course, the point that it is the first culture of Mesoamerican civilization,

There are other important factors as well.

From the point that the influence was handed down to other local cultures later,

First of all, it is characteristic

based on hierarchyPolitical systemThat there was.

This human head is believed to be that of the chief at that time,

They are currently arranged in chronological order.

Until then, such political organizations

Others such as faithView of the world.

We still need water to live.

You need rain to get water.

Without rain, rivers and lakes dry up.

There were no reservoirs or dams like there are today.

and grow plants on the ground.

The "rain" that pours it on the earth

It was very sacred.

and the“Water of Life” RainA place near the sky where the rain falls,

In other words, the “mountain” was a sacred place.

☝☝☝This is a rock in the state of Veracruz.
The sacred "water" that springs from the ground in the lower right,
"Snake" can connect with ancestors and gods,
It is carved to carry it to the top of the "mountain", which is a sacred place.
In fact, there is a real "mountain" behind this rock.
This place has been inhabited since around XNUMX BC.
It is believed that it prospered until about AD XNUMX.
The Olmec cultural sphere is located XNUMX kilometers in a straight line to the southeast,
Because of the mixed ages,
It is believed that the worldview of Olmec culture was also passed down in this area.

Mountains are close to ancestors and gods in heaven,

you can connect with them

considered as a place.

The model is commonly known as "Pyramid",

Right behind Teotihuacan's so-called "Pyramid of the Moon" is Mount Cerro Gordo.

The ruins are located on the summit of Mount Tlaloc, due east of central Mexico City (Tenochtitlan).

A small settlement in present-day Hiko in Veracruz,

There are ruins on the summit of Akamarine Mountain,

At the foot of the mountain there is a carving depicting it. (pictured above)

This expression is incorrect. 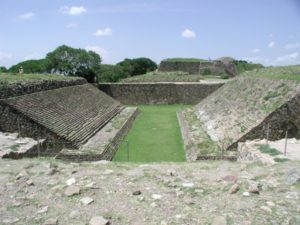 I will write more about this later,

This also originated in the Olmec culture,

It will be handed down to most places of subsequent Mesoamerican culture.

A large “ball ceremony hall” with a total length of over XNUMXm,

Or there is a ceremonial space.

Both Chichen Itza and Tula after AD XNUMX,

It is a relatively new city in Mesoamerica.

Nearly XNUMX years after the Olmec,

Moreover, the worldview of Olmec culture is inherited in other regions hundreds of kilometers away.

People who lived in the Olmec culture area

And what language were you speaking?

Although there is no definite proof,

ZoqueIt is speculated that the language

Soque is also one of the XNUMX languages ​​still spoken in Mexico today (XNUMX).

There is a small soque community in Chiapas.

I heard that there was a corona infected person in this Sokke village last month.

I was on the news.

The village does not have adequate medical facilities.

For folk and language,

I'll explain a little more on another day.

In that it left the world view strongly,

The Olmecs are a particularly important culture.

Sorry for the length.

Thank you for staying with us so far,

Thank you very much.