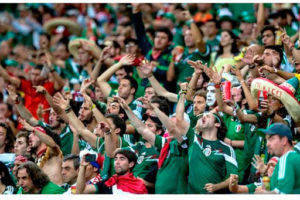 You've probably heard this topic before.

If you feel uncomfortable

If you say what this is saying,

FIFA sees this as a problem.

“If you do it next time, it will be a penalty.”

I warned the Mexican side.

The reason why FIFA sees it as a problem is because

"I insulted a homosexual man"

I saw it as a sexually discriminatory term.

On the other hand, Puta means prostitute.

Never use it while traveling. (bitter smile)

If you can make Mexican friends,

(depending on the person's education)

You will hear it often.

Actually, I use it a lot when I'm with friends like that. (Sweat due to bad education)

Therefore, it is not absolutely NG,

It's a very common word, depending on the situation.

when you mess up something

Saying like a monologue and holding his head in despair,

Saying that to himself, he rolled his eyes and was shocked.

But if you say this to a woman,

This is no good.

The man is a putto,

(I'm a gaijin with a foul mouth)

So why do you shout that at soccer games?

Is Mexico the same as Japan?It was a male-dominated culture. (is.)

For example, without courage,

A man who can't make up his mind

I'm going to make fun of you with puto.

In English, we call it chicken.

I say good things to my boss and colleagues who flatter above me. (smile)

It is used in the sense that

(This is just an image, there are actually many women who are tougher than men.)

The background is the long-standing image of male superiority.

Goalkeeper of the opposing team in soccer,

just before kicking the ball

They are yelling and ridiculing.

It's a common kind of heckling in sports cheering.

not a sexist term

Thank you to all the supporters outside of Mexico,

It seems that I started using this by imitating it.

(There is no confirmation,,,)

When someone slips for uke,

Including people you don't know

You can often see the spectacle of ridiculing at bars. (smile)

I have this background.