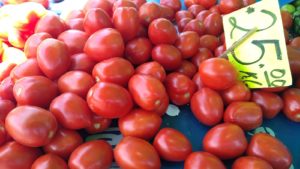 It is an undeniable fact that it is one of the important crops.

Starting with a home garden,

When I noticed, I was growing in XNUMX farmlands.

rather than for household

I was doing it as an extension of my hobby.

But when I saw it,

"This isn't a hobby, it's completely a business, heh~ amazing~"

I remember what I thought.

where did you get the knowledge from

I couldn't hear you after all,

For more than XNUMX years, I've been doing it without taking a day off.

With such a personal background,

Tomatoes are one of my favorite crops.

Where were you born?

Yes, of course it's Mexico. (smile)

There are two main types of tomatoes.

Green is not unripe,

It is green when ripe. (smile)

Are you in Japan too?

Tomato is written as Tomato in English.

In Spanish it is written as Tomate.

Tomate is a green tomato,

The red tomato is Jitomato.It's called.

In fact, this etymology is one of the XNUMX languages ​​still spoken in Mexico today.

I wrote a little bit about avocados a while ago.

The etymology of awacate (avocado),

Tomatoes are eaten on a daily basis in many countries around the world, including Japan.

It originated in Mesoamerica (now Mexico).

There are more than XNUMX types in the world,

XNUMX of them live in Mexico.

The Spaniards invaded Mesoamerica in XNUMX,

After that, he brought the tomatoes and hitomate back to Spain,

Cultivation begins in Europe for the first time.

Before the Edo period, Japan

It was around the time Hideyoshi became an old man. (bitter smile)

In other words, hitomate was more accepted.

Hitomate (red tomato) was then introduced to various parts of Europe,

The climatic conditions of Italy are the most suitable,

It was called the "love apple". (bitter smile)

After that, drying technology developed in Italy,

When Italian immigrants went to the United States, they brought hitmate (red tomatoes),

Today, the United States is the world's largest producer of hitomate (red tomatoes).

Ketchup was invented in XNUMX.

There is archaeological evidence that

Tomate (green tomato) has the oldest history of “cultivation”.

XNUMX BC in the Basin of Mexico,

Also found in Tehuacán, Puebla, around XNUMX BC. 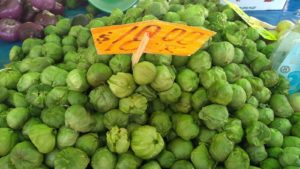 ☝☝☝Tomate (green tomato) has a shell called chalice, is sour, and is usually not eaten raw.
XNUMX pesos per kilo = about XNUMX yen

Originated in South AmericaIt is said that

Although the original origin is not Mesoamerican (Mexico),

After the arrival of the Spaniards,

It was first cultivated in the world in Mexico,

Veracruz or PueblaIt is said that.

I have no archaeological evidence

There is a description in the history books written by the Spaniards.

About the origin of hitomate (red tomato),

Due to the lack of archaeological evidence,

During the Mesoamerican period,

Although both red and green existed,

At least for the cultivation of red tomatoes,

Matches the spiciness of chile (red pepper)I do.

Also, salsa clay will be suitable.

Along with Chinampa, there is a farming method that has been practically used from the Mesoamerican era to modern Mexico.

Tomate (green tomatoes) grows naturally in Milpa without being cultivated.

Tomate (green tomato) is characterized by its appearance and sour taste,

I use it in a Mexican dish called Tamal.

By using this, you will have a unique elasticity.

It was also used as a digestive aid.

In the case of fresh

On the other hand, when used as processed products such as sauces,

With an increase in imports,

Tomate or Tomato in English,

It is unified and means red tomato.

Green tomatoes are not eaten very often outside of Mexico.

One-third of them are from the United States and China,

Mainly responsible for XNUMX% of domestic production in the state of Sinaloa in the northwestern part of Mexico,

Chiapas in the south.

I also use it for rice.

Rice may come out with an orange tint,

This is cooked with hitomate (red tomato),

Tomatoes, a crop that is surprisingly connected to Mexico.

From now on, every time you eat a tomato, remember Mexico. (smile)